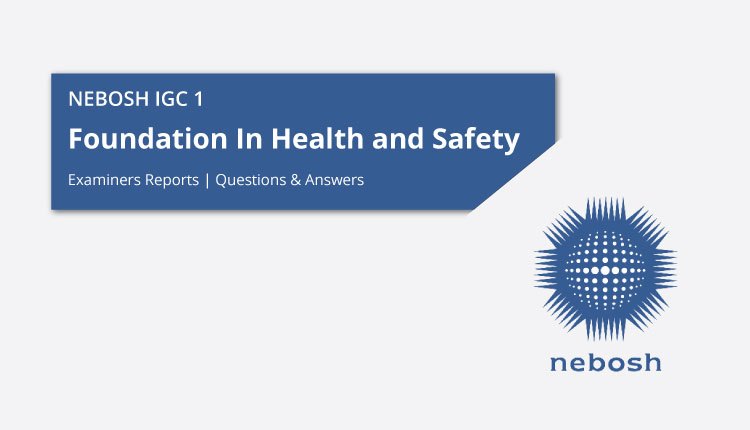 Element 1: Foundation In Health and Safety

An organization has an increase in the number of manual handling accidents and associated ill health.

Identify sources of information that may be available to help reduce the risks to the workers.

“Many candidates did not read this question with sufficient care and described the assessment process for manual handling activities rather than identifying relevant sources of information. Those who did realize what was required tended to concentrate only on sources immediately available within the organization.”

Health – The term ‘health’ can be defined as a state of wellbeing in both a physiological and psychological sense. In occupational terms, it would include not suffering for example from fatigue, stress or noise-induced deafness.

‘Safety’ –  It can be defined as the absence of danger or physical harm to persons, extending in the workplace to things such as equipment, materials, and structures.

Welfare – The term ‘welfare’ relates to the provision of workplace facilities that maintain the basic wellbeing and comfort of the worker such as eating, washing and toilet facilities which enable them to fulfill their bodily functions.

Environmental protection’ – It may be defined as a measure used to prevent harm to the environment of the world. It prevents harm to air, water, land and natural resources providing protection to flora, fauna and human beings and their inter-relationships.

“This question was poorly answered and few candidates seemed to have an understanding this terminology. Many were unable to distinguish between health and safety and struggled to give the meaning of ‘environmental protection’ often confusing it with the ‘in-house’ work environment.”

Examiners observed that candidates’ knowledge of these parts of the syllabus as being somewhat superficial and did not enable them to provide the breadth and depth of answers needed to gain good marks.

Sources of information that an organization may use to help maintain and promote good standards of health and safety include:

Reasons, why good standards of health and safety may not be achieved in the workplace, include:

A machine has leaked hot liquid into a work area.  No-one has been injured.

Outline reasons why it is important for an organization to investigate “near miss” incidents.

“This question was not well answered. There were only a few references made to Bird’s or Heinrich’s triangle and the general indication was that most candidates had little understanding of the topic.”

The main health and safety responsibilities of an employer are

“This part of the question was generally well answered though some candidates continue to provide a list instead of the additional detail required by an ‘outline ‘question.”

Possible actions which the enforcement authority can take, such as

“Good answers to this part of the question were not common.”

Identify possible costs to an organization following an accident in the workplace.

Identify possible costs to an organization resulting from inadequate health and safety standards.

Possible costs such as those associated with

Outline how national governments can contribute towards good standards of health and safety within their territories.

Explain the role of national governments and international bodies in formulating a framework for the regulation of health and safety.

“In the case of this question, it is likely that failure to provide sufficient points related to a lack of understanding of the topic of the question rather than poor examination technique.”

Identify the powers given to health and safety enforcement officers appointed under the Health and Safety at Work Act 1974.

The purpose of employer’s liability insurance is

Costs of a workplace accident that might be uninsured are:

Negligence – It may be defined as a civil wrong (tort) involving unreasonably careless conduct (or a breach of the common law duty of care), resulting in a loss, damage or injury.

General defenses available to an employer in a case of alleged negligence brought by an employee is that:

Negligence – It may be defined as a civil wrong (tort) involving unreasonably careless conduct (or a breach of the common law duty of care), resulting in a loss, damage or injury.

Standard conditions for an employee to prove a case of alleged negligence is:

Explain, giving an example in EACH case, the circumstances under which a health and safety inspector may serve:

Outline the main components of a health and safety management system.