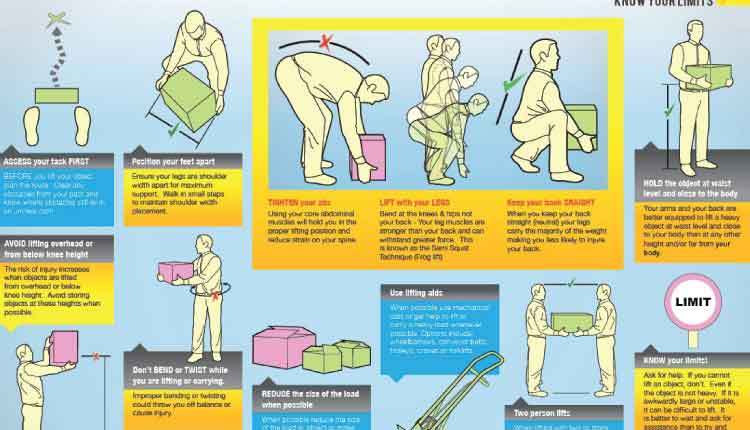 The term ‘ manual handling ’ is described as the movement of the load by the human effort solely. This effort or force may be applied directly or indirectly using the rope or the lever. The Manual handling may involve the carrying of the load or the direct support of the weight or load including the pulling, pushing, moving using physical force carrying, and, of course, straightforward lifting of the weight or load. Back injury because of the lifting of heavy weight or loads is common and million working days are lost each year because of such injuries.

Typical hazards of manual handling include:

The Manual handling operations or procedures can cause a wide range of the acute and the chronic injuries to the workers. The Acute injuries usually head to the sickness leave from the work and the period of rest during which time the damage recover or heals.

Chronic injuries build up over the long period of the time and are irreversible, producing illnesses such as the person with arthritis and the spinal disorders.

There is significant evidence to suggest that advanced lifestyles, such as the lack of the exercise and the regular physical effort, have contributed to the serious long-term effects of these injuries.

The several common injuries associated with the poor manual handling techniques or procedures are all musculoskeletal or characteristics and are:

The muscular sprains and strains – caused when the muscular tissue (or tendon or ligament) is stretched beyond its normal capability leading to the bruising, weakening and the painful inflammation of the area affected. Such injuries happen in the back or the arms and the wrists;

Back injuries – It includes the injuries to the discs located between the spinal vertebrae (i.e. bones), and it can lead to painful prolapsed disc lesion (commonly known as the slipped disc). These types of injury can drive to other conditions or situation known as lumbago and sciatica (where pain moves down the leg);

Trapped Nerve – It usually happening in the back as the result of another injury but the aggravated by the manual handling;

The Hernia – this is a rupture of body cavity wall in the lower abdomen, resulting in protrusion of the part of the intestine. This situation eventually requires the surgery to repair the damage;

Cuts, Bruising and Abrasions – It caused by the handling of the loads with the unprotected sharp corners or the edges;

Fractures – Normally of the feet because of dropping a load. The Fractures of the hands also happen but are less frequent;

The Work-Related Upper Limb Disorders (WRULDs) – It covers a wide range of the musculoskeletal disorders;

The Rheumatism – It is a chronic disorder involving the severe pain in the joints of the body. It has several causes, one of which is believed to be the muscular strains caused by the poor manual handling lifting technique or procedure.

In general, the pulling a load is much more comfortable for the body than pushing one. If weight or the load can only be the push, then the pushing backwards using the back is less stressful on the body muscles. Lifting a load from a surface at the waist level is more comfortable than the lifting from the floor level, and the most injuries during the lifting are because of lifting & twisting at the same time. If a load has to be carried or moved, it is easier to carry or to move it at waist level and close to the body trunk. A firm grip is necessary when moving any weight or the load.