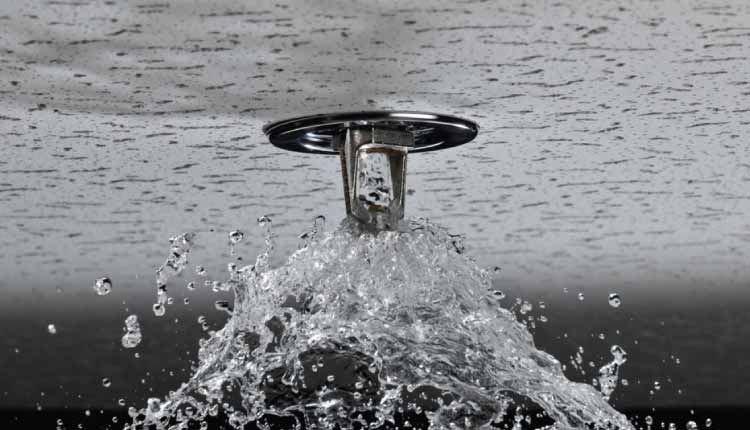 Sprinkler systems are among the most useful tools in your fireghting arsenal. Today’s systems
have been shown to reduce deaths and property loss by more than 65 percent.

Contrary to popular belief, fire sprinklers are not triggered by smoke. It’s an easy mistake to make since heat is carried upward with smoke from a fire. But if smoke was the trigger, simply burning your toast in the office kitchen could be enough to drench the kitchen with water from a fire sprinklers.

Fire sprinklers work because high heat triggers the sprinkler system. When a blaze ignites, the air directly above it heats rapidly. This hot air rises and spreads along the ceiling. When the air is hot enough and reaches a sprinkler head, it triggers a chain reaction.

Most sprinkler heads feature a glass bulb filled with a glycerin-based liquid. This liquid expands
when it comes in contact with air heated to between 135 and 165 degrees. When the liquid
expands, it shatters its glass confines and the sprinkler head activates.

Each sprinkler head is attached to a pipe that connects to a reliable water source outside the building. When heat activates a sprinkler head, a valve opens, allowing pressurized water from the pipe system to flow out.

It’s important for water in a fire sprinkler system to be pressurized. This allows the water to spray outward in an arc to more thoroughly douse the fire and prevent it from reigniting.

In movies, sprinkler systems operate in a misleading way, leading many people to believe a fallacy that all the sprinklers in a system are tied together and when one is triggered by heat,  they all activate.
If this was the case, putting out a fire would simply be trading fire damage for water damage, and it’s not how fire sprinkles work.

Fortunately, sprinkler heads function individually. Most of the time, fires can be completely extinguished after just one or two sprinklers activate. This allows water damage to be conned to the small area where the fire started. Plus, since fire sprinklers douse fires with about six times less water than a fire hose, their quick action is actually less damaging to your property than a visit from the fire department.