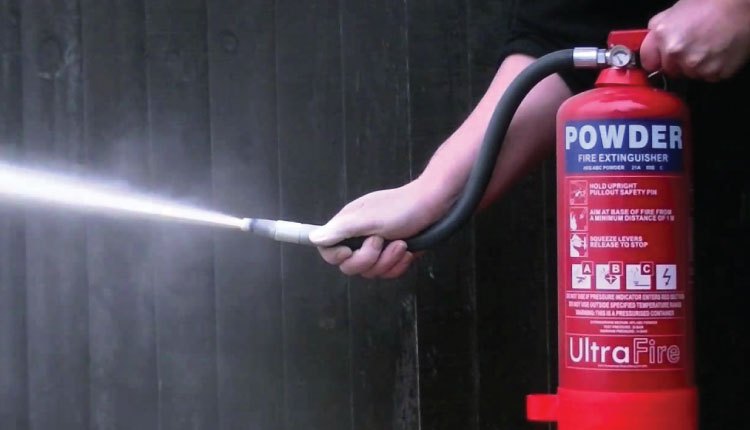 Fire extinguishers are generally looked upon as being a safety device, so not many people think
about the potential dangers they hold. As with anything you bring into a home or workplace, it’s
important to fully understand the devices used.

While fire extinguisher powder is non-toxic, it is not entirely safe. The chemicals used are
considered appropriate for home use, but you should take precautions to avoid touching or
inhaling too much of the powder.

After a fire, the residue left by a fire extinguisher needs to be cleaned up. Many areas do not permit phosphates or sulfates to be added to the water table. Since the vast majority of fire extinguishers contain ammonium phosphate and/or ammonium sulfate, you need to be careful about cleaning up.

The chemicals can irritate skin, so use gloves and avoid inhaling by using a dust mask. You should be able to simply sweep or vacuum the residue up and then don’t forget to get a fire extinguisher inspection, recharge, or buy a new one.

Despite being non-toxic, you shouldn’t try to eat the powder that comes from a fire extinguisher. If you do eat some of the powder, it could cause your throat to become sore and red and may even cause some stomach upset, but this would require quite a bit of powder.

You should rinse any dishes or food that has been covered, but if you do get a little on your plate, don’t worry. It won’t hurt you in small amounts and is quite safe to deal with.

Inhalation is one of the biggest dangers with fire extinguisher powder. It is very irritating to mucous membranes and may cause difficulties with breathing if inhaled in large enough quantities. Usually, in a small fire situation where you would be using one of the commonly seen extinguishers, there would not be enough dust to be breathed in.

However, if it does happen, you should go to the hospital. The dust may coat your lungs on the inside, which can prevent oxygen from reaching the rest of the body.

Not all fire extinguisher powders are the same. They must be non-toxic in order to be safe for home and car use, but keep in mind that the powder may be irritating to skin and eyes. Avoid inhaling and certainly stay away from ingesting quantities of the powder.

If you are in doubt as to the dangers, go ahead and call your local poison control or ER. They can advise you on what to do in any given situation.